Health care professionals working in crisis situations often work under very high pressure for a long time. Can we really request this from them? “From other crisis situations we’ve learned that most care givers can handle this for certain period of time” says consultant Johara Boukaa. “But management will have to put measures in place to prevent them from getting exhausted.”

Johara Boukaa is  Senior Advisor Staff Care at World Vision International, a major humanitarian aid organisation. For years, she worked as an emergency response worker. She has seen many crises in the world up close, such as the tsunami in Indonesia, the typhoon in the Philippines, and the earthquake in Haiti. “I think that working at some ICU’s in Europe right now can be compared to the crisis situations I have experienced abroad”, she says. “No crisis is identical, of course. Right now I  see full ICU’s and hospitals in the Netherlands having to cope with an overwhelming number of patients needing immediate medical attention. This inevitably reminds me of the large crowds of people  arriving at the refugee camps, needing assistance  and shelter.

In an emergency like this there is a huge demand on  health care workers. Can they cope?

“Yes, health care workers are well-trained professionals. From my own experiences and from other emergency situations, I know that that they fall back  on this professionalism. During stressful times, adrenalin and cortisol  are released in the body among other stress hormones. This enables them to perform at top level for a few weeks. In addition, they are likely  to feel the pressure of the need to do their job. It provides them with a sharp focussed mind and with endurance.  In former crises, I have seen that people who have built good reserves and are in good physical condition, can perform at the top level for as long as four to five weeks.” 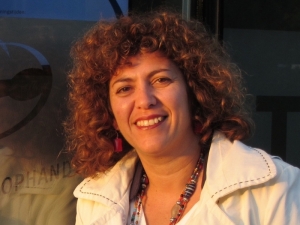 Johara Bouka worked for years as an emergency relief worker in developing countries.

What does this mean for the long term?

“Scientific research in this respect, shows that people are incredibly  resilient.  The majority of people working under high pressure for a long time in a crisis situation can cope and recover from this effort. The majority does not experience  long term consequences.”

What do you see after four to five weeks?

“After a few weeks, the fatigue really starts to kick in. Particularly health care professionals, having to deal with the critically ill who cannot be saved, may get exhausted in the long run. Other crises teach us that health care workers, who continue to carry on for much longer, become exhausted and  may even be heading for a burn-out.”

What can  management do to prevent this?

“They can take certain measures. This starts with the smart  deployment  of available healthcare professionals. As far as possible, do not use up  all of your people at the beginning of a crisis, . You only deploy who you need. As it is, you will a need care givers who can relieve the first group, so these front line people can take their much needed rest. This is actually the course of action in the Netherlands. Hospitals have been looking for additional staff from the get-go, such as  pensioners  who still have their health care license . It is good to have these people on stand-by.”

How do you deploy these people in a clever way?

“During the tsunami response in Indonesia, for instance, I saw that we, the emergency response  workers, tended to work extremely long hours as a result of the acute emergency. Sometimes we  worked  for 18 to 20 hours a day. Management should realise that people cannot keep  this pace up for a long period of time. It is important to decrease working hours after the first few weeks. Health care workers may not do so by themselves as long as the situation remains critical. They want to continue working and don’t realise they need rest. They are constantly pushing  their limits. That’s why management should put in protective measures. In Indonesia for instance, we did that by closing our office, which opened at 07.00 am, at 19.00 pm. This meant that  people were able to work for only  12 hours a day. Long days still, but not as long as in the beginning.  We did see that some people still found ways to stretch their working hours. But it is really important to put a halt to these long working days after a few weeks.”

So now health professionals work a maximum of 12 hours a day. What else can management do?

“Make sure that you are there for your staff. Create rest & relaxation areas  where staff can take a break and ensure they eat good and healthy food. For example you can provide fruit bowls  for them and provide tasty and healthy  lunches.  Express your recognition and appreciation for their work. For instance, management putting up a bannersaying ‘We cannot do this without you’ will touch many. Or a card with a personal message in their mailbox. This will all boost their morale.” 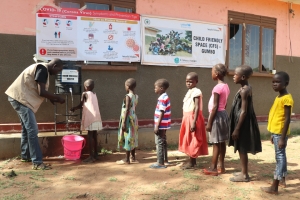 In addition, it is important to keep an eye  on health staff  who  are struggling to  cope . Early detection of a person’s temporary inability to cope, can aide them to  recover more quickly   by taking rest and by literally taking a distancing from the situation. If someone goes on despite signs that they are not coping,  they really risk getting exhausted. This means that a burn-out could be around the corner. At some point there will no other option than to take time off from work for a long time.    In order to prevent this scenario, it is important for colleagues to keep an eye on each other. Ask your colleague how they are doing when you feel that they are stressed. Suggest an hour’s walk or a call  to one of the helplines set up for health care workers.  A trained team of  peer supporters can also provide assistance. Offering a short moment of relief, to tell their story or to catch their breath may prevent people from dropping out for a longer period.”

For how long can health professionals perform at the top level if you have taken all these measures?

“In my organisation emergency relief workers, when deployed abroad, usually work a maximum of six weeks in a crisis situation. Then they are given a week of rest and relaxation  to catch their breath, after which they will go back to work for another period of six weeks. But after that period they have really reached their limits. Ideally they then hand over their work to a substitute, so their maximum time in   emergency response project would be three months. Regarding emergency responses abroad, this often means that the mission has come to an end for them. They now go home to completely recover from the strain.”

What is a good way to close that period?

“A crisis or the deployment of an individual should have a clear end point. Otherwise, people could fall  into a black hole, as I  remembered I sometimes did when I came home from a mission after three months of extremely hard work.  I’d come home to a world where everything had been going on as normal. This brought up questions like: What am I doing here? What am I going to do now? This will probably be true for the people who are working in the current crisis. The problem is that a crisis often has no clear end point. Usually the deployment of personnel is gradually downscaled. Still, it is a good idea to give attention to the moment when a group of people stops. For instance, you can bring them together, thank them for their commitment and give them a small memento. That will help them to bring this period to a close and to for them to turn back to life after the crisis.”